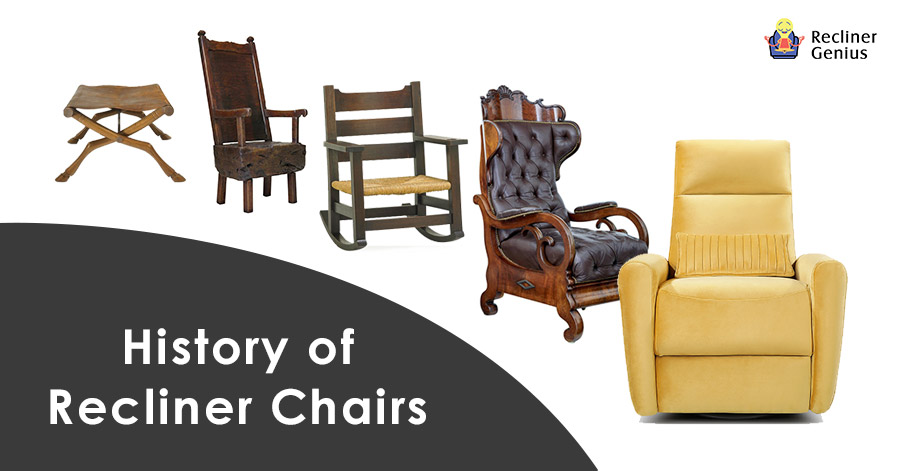 Recliners have been through many reinventions over the years to give the ultimate lounging experience. You can now see recliners almost at every place from houses, offices to clinics.

But have you ever wondered how they came in the first place? This article gives you a clear narrative of the birth and evolution of recliners over the centuries. Read further to know their amazing story.

The recliner is derived from the Latin word reclinare meaning “to be bent back, to lean back; cause to leave”. Later in the early 15th century, the word recline was updated by the French. In 1660’s France, the term recliner became famous.

Recliners in the Ancient Days The first recliners in history belonged to ancient Egyptians who considered lounging to be an art form. ‘Klines’ are the daybeds Egyptians used to wine and dine. Queen Elizabeth during her reign used a stool with a pillow to support her feet and a mechanism to recline in different positions.

Charles I of England and King Philip II of Spain enjoyed using sleeping chairs with adjustable backs. Even the Napolean III used a transferable, upholstered, reclining camp bed with a steel frame.

Recliners were built by medical device companies for doctors and dentists. Later the recliners for indoor use came rolling out in the 1830s says the author of Now I Sit Me Down Witold Rybczynski.

In 1877, N.N.Horton, a Kansas city doctor, designed an adjustable chair especially for train journeys so passengers can sleep comfortably. William Morris, the founder of the British Arts and Crafts movement found the ‘Morris Chair’ with cushions. Stickley’s rocker with the reclining position

1901s Food adjustable rest chair and Stickley’s rocker with the reclining position was inspired by the Morris chair.

The recliner by Stickley was able to recline to multiple angles equipped with soft cushions. It became a popular choice for people of the Middle class. In those days, the reclining function was less about relaxing and more about comforting people of different bodies. The manufacturers made it possible by designing different-sized chairs for different-shaped bodies.

After Morris's chair became popular, other recliner chairs for indoor use come popping out. Not only travelers and patients, everyone was in search of a comfortable reclining chair. In 1928, the American cousins Edward Knabush and Edwin Shoemaker started the famous recliner company La-Z-Boy. It made Americans put comfort in the first place. The brand became very famous that everyone started referring to recliners as La-Z-boys. Many American households started buying La-Z-Boys. A decade after La-Z-Boy became popular, its competitor Edward Joel Barcalo acquired the license to manufacture scientifically connected motion chairs. Many manufacturers came up producing modern recliners because they became the only way to get ultimate comfort at home. In 1959, David Palmer a massage therapist introduced a massaging chair that Shook and jiggled the user’s tired backs. Though it was not exactly a recliner, it paved the way for the invention of robotic recliners. The robotic recliner massage chair became popular in North America. Recliners in the present day are fully advanced. Sophistication is what matters when it comes to recliners. Nowadays recliners are remote controlled and the mechanism is made easier to control with just a touch of a remote. Modern recliners have made lifting and getting out of the chair easier compared to conventional recliners. They have wi-fi connectivity, massaging and heating elements, lumbar support, cup holders, and storage bags to accommodate essentials.

In the present day, we can see that recliners have evolved from big bulky chairs to slim and sleek chairs. The modern recliners take up less space at home but the comfort it offers is never less.

Timeline of the Chair

Let’s look at how recliners evolved over time.

Before the 12th Century: Seats of the recliners were either benches or three-legged stools. They were basic, simple, and easy to use.

12th to 15th Century: Seats were added in the back and four legs attached to become chairs. The style of the chair during this period was influenced by ancient times. High-backed chairs were usual in this period.

15th to 17th Century: With the flourishing of the Renaissance period, the chairs became light, thin, more attractive, and more comfortable. Both appearance and function became important.

18th Century: Richness and usage of chairs grew more in this period. Monarch’s chairs were built with curved lines and floral designs. The middle and upper class then started using separate dining chairs, armchairs, living room chairs, side chairs, and a small bench by the fire.

19th Century:  The Napolean empire introduced heavy, bulk, straight-line chairs replacing the 18th-century chairs after the French Revolution. Large chairs became very popular during this period. The 19th-century was known for its bulk fabrics in dark colors like red and blue. Contrary to this was the federal movement in America which was a traditional look.

20th Century: Furniture came into the handle of people and no longer the Monarchs. Mission and Arts and Crafts styles were the beginning of this century.

21st Century -  In the present century, recliners are fully advanced. The entire chair can be controlled with a touch of remote control. They are available in various styles and designs to choose from. Comfort is focused primarily on the making of recliners.

It’s not just the recliners that are evolving but also the way people decorate their chairs. Physical and psychological health is considered to be primary when it comes to recliner chairs. With the demand for recliners increasing every day, the recliner chair market has become a billion-dollar industry. They are used in almost every place we know from parlors, workspace to treatment centers.

Buying a recliner chair for the household has become very important these days to fulfill our needs. With the styles and designs available in the market today, you can choose from a wide range of products. Recliners have become good companions to whoever owns them. Hope you learned the history and evolution of recliners through our article.

Disclaimer - The images inside the article were collected from the internet. We do not own any of them.